Tirangaa (English: Tricolour) is a 1993 Indian action drama film starring Raaj Kumar, Nana Patekar, Varsha Usgaonkar, and Mamta Kulkarni.[2] The movie was a blockbuster.[3] At the time of the 1993 Bombay bombings, Plaza cinema, Mumbai was also bombed where the movie was being shown, leaving 10 dead and 37 injured.

Rudrapatap’s son Harish (Harish Kumar) is the only witness of his murder. When the scientists are gone missing, police calls Brigadier Suryadev Singh (Raaj Kumar) to take the matter into his hands. Suryadev allies with honest but hot-headed Police Inspector Shivajirao Wagle (Nana Patekar) who spends a lot of time being suspended due to his temper. 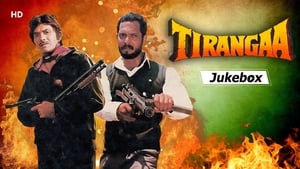