The Departed is a 2006 American crime film directed by Martin Scorsese and written by William Monahan.[2] It is a remake of the 2002 Hong Kong film Infernal Affairs.[3] The Departed stars Leonardo DiCaprio, Matt Damon, and Jack Nicholson, with Mark Wahlberg, Martin Sheen, Ray Winstone, Vera Farmiga, and Alec Baldwin in supporting roles.

The Departed takes place in Boston. Irish Mob boss Francis “Frank” Costello (Nicholson) plants Colin Sullivan (Damon) as a mole within the Massachusetts State Police; simultaneously, the police assign undercover state trooper William “Billy” Costigan (DiCaprio) to infiltrate Costello’s crew. When both sides realize the situation, Sullivan and Costigan each attempt to discover the other’s identity before they are found out. The character Colin Sullivan is loosely based on the corrupt FBI agent John Connolly, while the character Frank Costello is based on gangster Whitey Bulger.[4][5]

To take down South Boston’s Irish Mafia, the police send in one of their own to infiltrate the underworld, not realizing the syndicate has done likewise. While an undercover cop curries favor with the mob kingpin, a career criminal rises through the police ranks. But both sides soon discover there’s a mole among them. 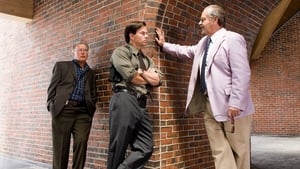