Special 26 (also known as Special Chabbis) is an Indian 2013 Hindi language heist film directed by Neeraj Pandey and produced by Friday Filmworks and Viacom 18 Motion Pictures. It is based on the 1987 Opera House heist where a group posing as CBI officers executed an income tax raid on the jeweler in Bombay (present-day Mumbai). It stars an ensemble cast of Akshay Kumar, Kajal Aggarwal, Manoj Bajpayee, Jimmy Sheirgill, Anupam Kher and Divya Dutta in lead roles.

Special 26 released worldwide on 7 February 2013 and following the widespread critical acclaimed reviews, the film was a critical and commercial success upon its release. Made on a total budget of ₹390 million (US$5.5 million), it grossed ₹1.26 billion (US$18 million) worldwide and became the 10th highest-grossing Bollywood film of the year. The film is considered as one of the finest movies of that year.

Special 26 was remade in Tamil as Thaanaa Serndha Koottam in 2018.

In the early 1980s in India, a group of con artists robs well-known businessmen and politicians by posing as officers of the Central Bureau of Intelligence or income tax officials. The gang stages fake raids during which they steal great amounts of money from their targets. 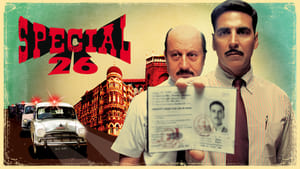