Ouija is a 2014 American supernatural horror film directed by Stiles White in his directorial debut, produced by Jason Blum, Michael Bay, Andrew Form, Bradley Fuller, and Bennett Schneir and written by Juliet Snowden and White, who previously together wrote The Possession.[4] It stars Olivia Cooke, Daren Kagasoff, Douglas Smith, and Bianca A. Santos as teenagers who have unleashed spirits from a Ouija board.

Ouija was released on October 24, 2014, by Universal Pictures. The film was a commercial success, grossing $103.6 million worldwide over a $5 million budget, but was overwhelmingly criticized by critics, with many criticizing its inconsistent tone, characters, and story, but praise for Shaye’s performance. A prequel, Ouija: Origin of Evil, was released in 2016 and was far better critically received.

A group of friends must confront their most terrifying fears when they awaken the dark powers of an ancient spirit board.

The film was announced in May 2008 with Universal attached.[10] At one point in 2011 Universal dropped out due to budgetary concerns.[11][12] Following this, it was subsequently announced that the film would be produced at a lower budget [13] and Universal rejoined the project.[14]

Although shooting officially wrapped in January 2014,[7] poor test screenings resulted in re-shoots occurring in June,[15] which, according to Olivia Cooke, resulted in half the film being re-shot. With the reshoots, Lin Shaye was added to the film to play a newly written character, Erin Moriarty’s character was removed from the film entirely, and new plot points were added or changed entirely. The most notable of changes included the character of Doris Zander’s physical appearance changing from that of a burnt looking girl to a rotting, decomposing girl with stitches in her mouth.[16] 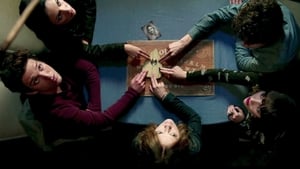