The movie begins with Upasana (Sayani Gupta), Chanbi (Lin Laishram) and Zorem trying to find an ingredient for ‘Axone‘ dish, for wedding of their friend Minam (Asenla Jamir) on the same day. Minam is away on an interview. Upasana, Chanbi and Minam share flat with others hailing from their region. A small wedding preparation is underway, but the friends faces various hurdle. Their attempt to hold a wedding party and cook Axone is admonished by other tenants, as well landlord’s mother-in-law’s rule of no party or cooking pungent dish in the flat. After some difficulties at finding place for the wedding party, they decide to hold it at Bendang’s flat who is Chanbi’s boyfriend. They try to find a way to cook Axone without drawing the attention of local, but are unable to due to their sudden unplanned schedule and language barrier with locals.

Shiv, the landlord’s son who also friend of Zorem, lends his hand while his girlfriend breakup with him after seeing him with Upasana and Chanbi. As the wedding hour near, the friends are disheartened to not be able to give a good wedding party for Minam (who has not returned yet). Zorem after seeing a commotion due to water being inadvertently thrown from open terrace, get the idea to cook it at Upasana landlord terrace. Zorem get the landlord permission, going against his mother-in-law wish. They manage to met the deadline and the wedding plan goes ahead.

The wedding hour arrive with a small party in Bendang flat. The marriage begin with Minam opening a video conference with her Groom and family at native home. To the shock of Shiv who found out it was a long distance marriage and the bride sister (in Minam place) was marrying the groom and all the Axone trouble for a marriage that was not even there. After the wedding ceremony Zorem proposes to Upasana and Chanbi decides to return to her native place with Bendang. Meanwhile Bendang make peace with his past racist incident.

During the end credit scene, the friends treat themselves to Axone, while Shiv is unable to find any mainland India cuisine. 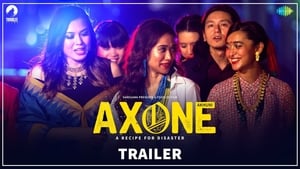