Ab Ke Baras (English: This Year) is a 2002 Indian Hindi action romance film. It had launched the career of the two newcomers, Amrita Rao and Arya Babbar. The film was a disaster at the box office. Amrita Rao could survive the debacle briefly, but Arya Babbar could not.

U.S. based Anjali Thapar (Amrita Rao) has repeated dreams of a parallel life in India, the temple of Devi Maa Durga, & some sword-wielding men on horseback. She and her mom consult a pandit, and he advises them to go to India to clear this matter up, as this pertains to her past life. Mr. Thapar will only let Anjali go there after she marries the man of his choice, so Anjali decides to run away. Her dad alerts her uncle, a ruthless CBI Officer, DCP Sikander Baksh (Danny Denzongpa), who is soon on her case. Anjali meets with car-thieves, Karan and his uncle (Arya Babbar and Shakti Kapoor respectively), and then begins her journey into a past life, as Nandini, the lover of freedom fighter Abhay (also Arya Babbar), and his subsequent death at the hands of British-aided traitor Tejeshwar Singh (Ashutosh Rana). Anjali does not know that Tejeshwar is still alive, is a powerful minister in the Indian Government, and has decided that he will make history repeat itself by separating the two lovers again – this time with the help of the government machinery.

Director Rahul Rawail wanted to make a movie with Sunny Deol and Padmini Kohlapure in the mid 80s, which was related to reincarnation, but things didn’t work out when Padmini took a break from films after marriage. The film was initially titled as Mohabbat Aur Karz in the year 1988; later, director Raj Kanwar started the film in 1999 as Saath Pichle Janam Ka, featuring Saif Ali Khan and Mahima Chaudhary in lead roles, but Saif asked for more salary that was beyond the budget, Mahima too asked for the same, due to which Raj Kanwar shelved the movie. Finally the film was started in 2002 with newcomers Arya Babbar and Amrita Rao as Ab Ke Baras. 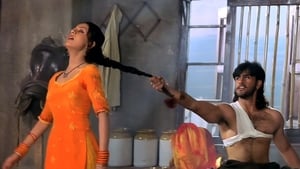